Spoon-billed Sandpiper (Calidris pygmaea) is the most threatened shorebird on the East Asian-Australasian Flyway, with perhaps as few as 200 breeding pairs remaining, having undergone a dramatic decline during the past two decades, partly as a result of loss of habitat on the flyway. Like many migratory shorebirds found in Thailand, the Spoon-billed Sandpiper breeds on the Russian tundra and twice a year makes a hazardous migration along the coasts of east Asia. About 10 Spoon-billed Sandpipers are recorded in the Inner Gulf of Thailand each year with Pak Thale-Laem Phak Bia in Phetchaburi province having the highest annual records. This bird is quite site faithful as shown by the fact that birds flagged and numbered on the breeding grounds have been recorded at the same sites in the Inner Gulf of Thailand on successive years.

BCST has been monitoring Spoon-billed Sandpipers and other migratory shorebirds in the Inner Gulf of Thailand since 1995. With the help from local bird surveyors, Suchart Daengpayon (Tee) for Khok Kham and Seri Manit (Daeng) for Pak Thale-Laem Phak Bia (until 2016), we are able to intensively monitor shorebirds at both sites resulting in an impressive records of 7 flagged Spoon-billed Sandpipers: Lime 05, Lime 02, White OC, White P7, White AA, White U6 and Yellow 5(x).

‘Lime 05’ is the most well known among several flagged Spoon-billed Sandpipers that have been recorded in Thailand. It is a female bird that was ringed on 20 June 2013 in the vicinity of Meinypil’gyno Village, Anadyr District, just south of the Arctic Circle in Chukotka Autonomous Area, Far East Russia. She was then observed and photographed on her wintering grounds at Khok Kham, Samut Sakhon Province, Inner Gulf of Thailand on 30 November 2013 after a long-distance migration covering over 7,500 km from Far East Russia. She remained there until at least 6 March 2014 and since then, has continued to come back to the same area every winter. 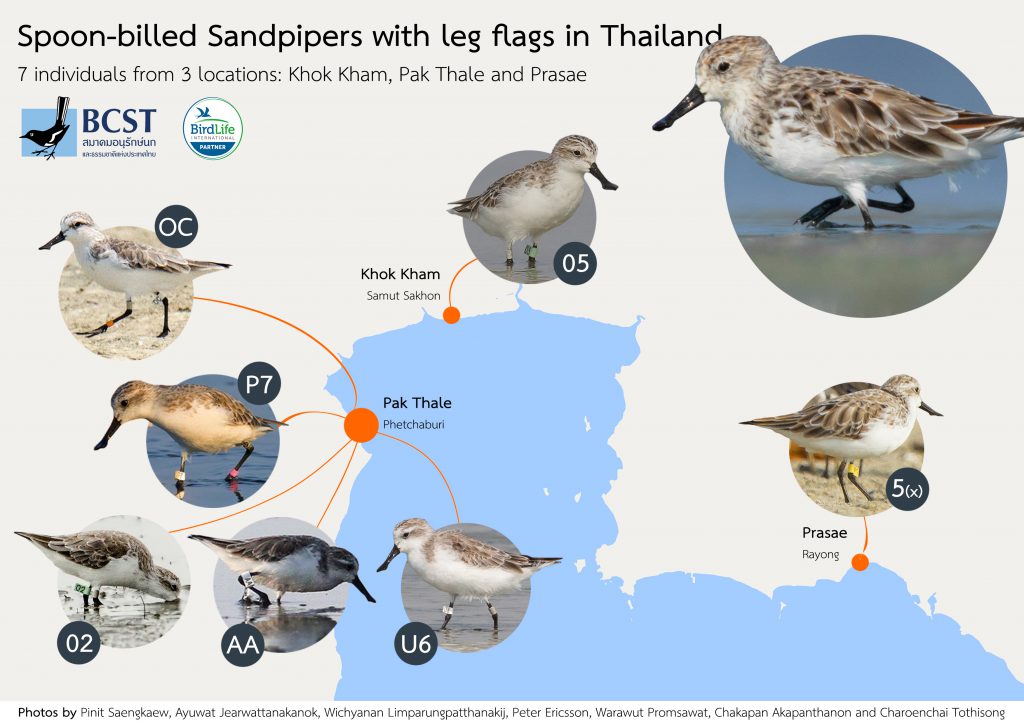 When becoming a member, not only do you help us conserve birds and nature, you will receive member benefits such as special discounts on products and activities, our monthly newsletter and Robin publications.

To donate via PayPal

Please call in advanced to make an appointment to visit the office.

The Bird Conservation Society of Thailand (BCST) is one of the oldest organisations conserving birds and nature in Thailand and is the country partner of BirdLife International. BCST’s role to the local community is to spread awareness about urban birds and reconnect people back to nature.